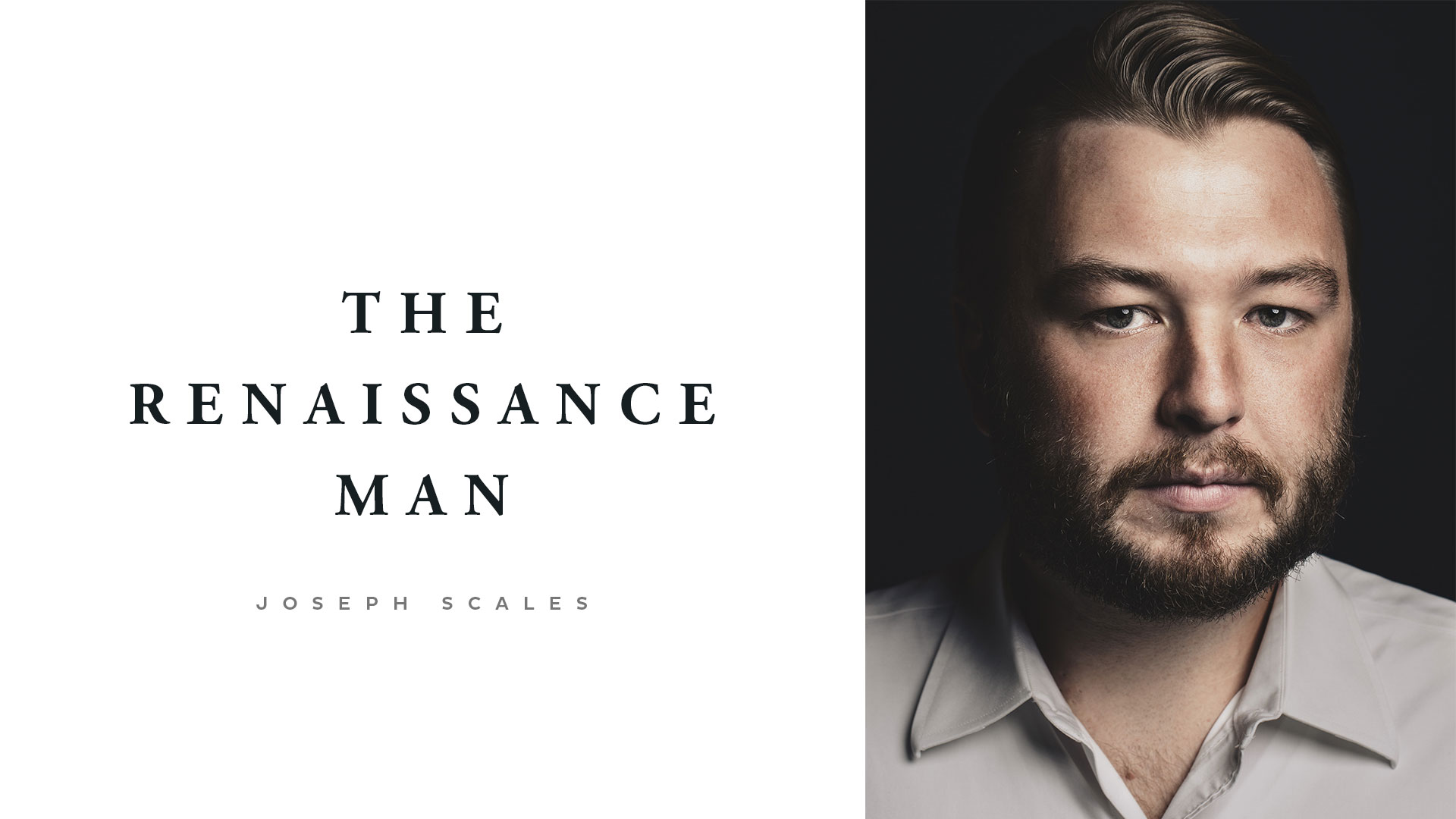 In 1924, as the superintendent of Delphi Schools, Ortho Lorton Scales was tasked with finding a home for a brand new Indiana YMCA camp. After an extensive search, he settled on a plot of land nestled on the banks of the Tippecanoe River. For the next 92 years, Camp Tecumseh would produce men and women who would act as torchbearers, taking the love, faith, and fellowship they felt at Camp out into the world. Included in that group would be Ortho Lorton’s children, grand-children, and great-grandchildren.

Sitting across a wooden picnic table on the back porch of Buffalo Lodge is Joseph Scales, Ortho Lorton’s great grandson. His starched white shirt and combed back hair mark a maturation separating him from the nineteen year old who sat here six years ago writing late-night parent letters.

A renaissance man for the millennial generation, Scales’ formidable intelligence is matched by a voracious sense of adventure. Both erudite and wickedly funny, he quotes David Foster Wallace and cites Renoir influence with the same proficiency as he casually jokes about American politics and the latest episode of Game of Thrones.

As a 25 years old law school student, his resume reflects a generational shift in the process of building a meaningful life and career. He graduated from Vanderbilt. He’s worked for both the US House of Representatives and the US Senate. He’s written columns for the Saturday Evening Post. He’s written a novel. He’s worked as the art historian at the Norman Rockwell collection. He’s fluent in French. He’s studied business law in China, garnered over 1 million hits on YouTube for his impressions, worked as a voice actor, and performed on the stand up comedy circuit in Nashville, Tennessee. Most recently, he spent a summer working as a human rights advocate in the African nation of Togo.

While his success and experience are no doubt a blend of natural talent and hard work, there’s another factor at play: a family history rooted in Tecumseh values that stretches back to Ortho Lorton Scales and the founding of Camp Tecumseh. 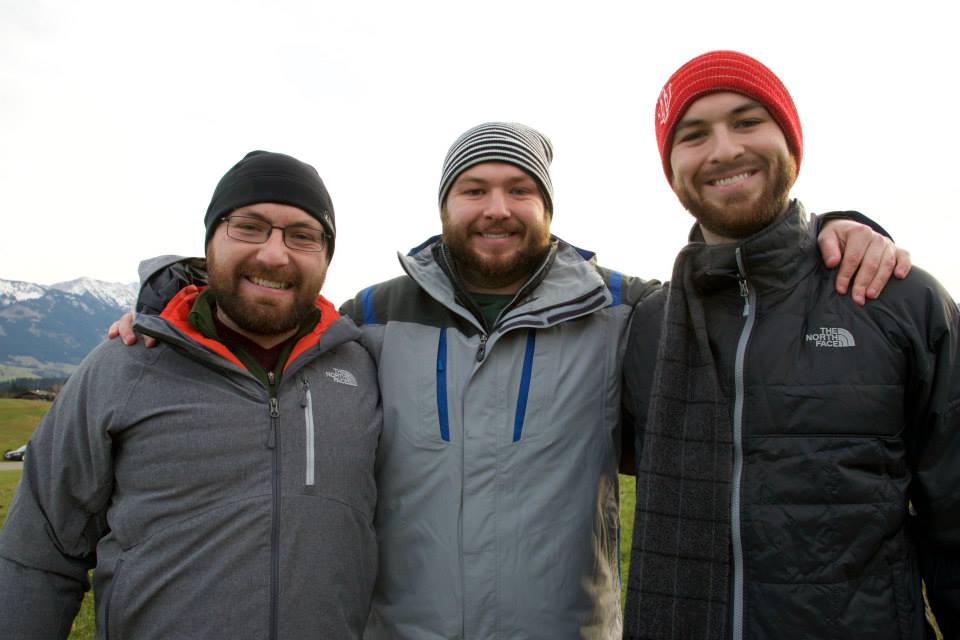 Camp has always been a family affair for the Scales clan. The youngest of three boys, Joseph grew up hearing stories about Camp from his brothers William and Andrew, whose larger than life personalities (and years later, legacies) helped ease Joseph into Camp life. “It’s a different environment interacting with your siblings when other people are around and your parents aren’t there. You really get to figure out who your brothers are and I learned that my brothers were good guys. ”

Scales began his Camp career in 1999 as an eight year old Buck, and he returned every summer that he was eligible. “Camp is where I really became who I am today. It may have been the friendships that I made, or the influences I had here, but Camp provided me with moral and ethical guidance from people who weren’t my immediate family. I had role model counselors that I think back on today and look up to. I understand they weren’t perfect people, they were college kids after all, but they felt responsible for a cabin of kids and responsible for perpetuating the culture that’s developed here. I still remember the lessons I learned. I may not always think about them directly, but they constantly influence and inform my identity and my decisions today.”

Scales views summer camp through the lens of the Norman Rockwell American ideal. “Camp is a quintessential American experience. So many of Rockwell’s paintings represent this bubble where kids are free to be kids. They are safe, separated from the real world, and they can have all these experiences with people their own age. Kids are given responsibilities. In schools today, kids are forced to sit at their desk and work by themselves, and they have designated times to socialize. At camp, the script is flipped. Kids solve problems. They are forced to work together in a way that’s natural and organic.” 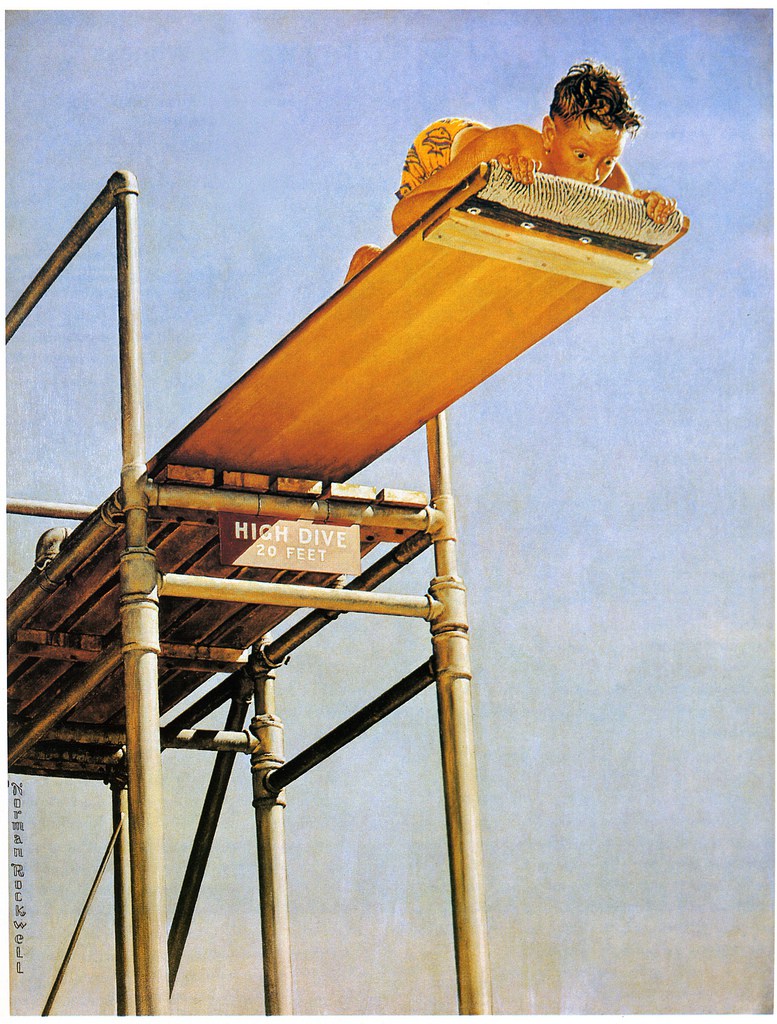 For Scales, the exposure to people from different backgrounds is one of the most important parts of the experience. “For many kids, Camp provides the first interaction in an environment with people from all over the place. At the beginning of campfire, when all our international staff and campers announce themselves, for many kids, that’s the first time they’ll interact with somebody from Brazil, or Egypt, or Sweden, or Australia.” It’s through this exposure that kids develop the necessary empathy to want to help others and build relationships with others.

After a few years off after his CILT experience, Scales returned to Camp as a counselor where he worked with 14 and 15 year old boys alongside Brian Vanneman in Comanche cabin. It was here, providing commentary in Morgan Freeman’s voice over Planet Earth to 300 kids in the dining hall, that he learned to be comfortable in front of people. It was here, facilitating the teams course, that he discovered his potential for leadership, and it was here, on the back porch of Buffalo with his fellow counselors, that he honed his easy sociability. All of which would pay off during his work in Togo. 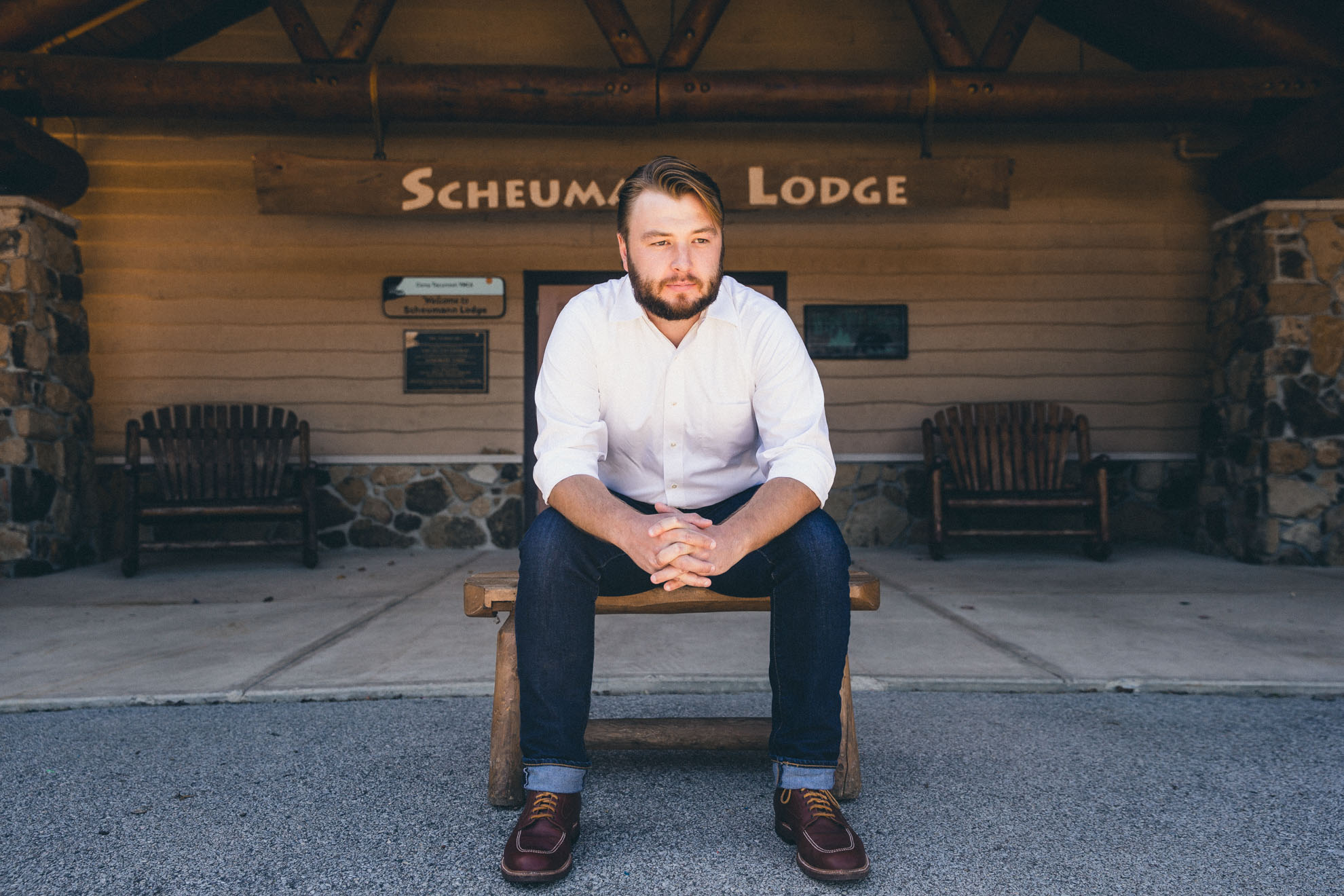 In 1997, George Edwards established the Program in International Human Rights Law at the McKinney School of Law. The program has placed 200 interns in over 55 countries and possesses special consultative status with the United Nations. Scales applied, and after an interview which included discussion of his fluency in French and his undergraduate work on postcolonial literature, he settled on Togo.

One of the smallest nations in Africa, Togo lies on the western coast between Ghana and Benin. A largely agrarian and impoverished society, the average Togolese worker survives on $1.25 a day. Like many post-colonial west African countries, Togo changed hands between the British, French, and Germans until it gained its independence in the 1960s. For the following  40 years, Togo was ruled by Eyadéma Gnassingbé. Following his death in 2005, his son assumed power after a contentious election. He subsequently jailed thousands of Togolese protesters and journalists. 11 years later, many of those protesters and journalists remain in prison and have never been formally charged, never sat in front of a judge, and never had a lawyer. 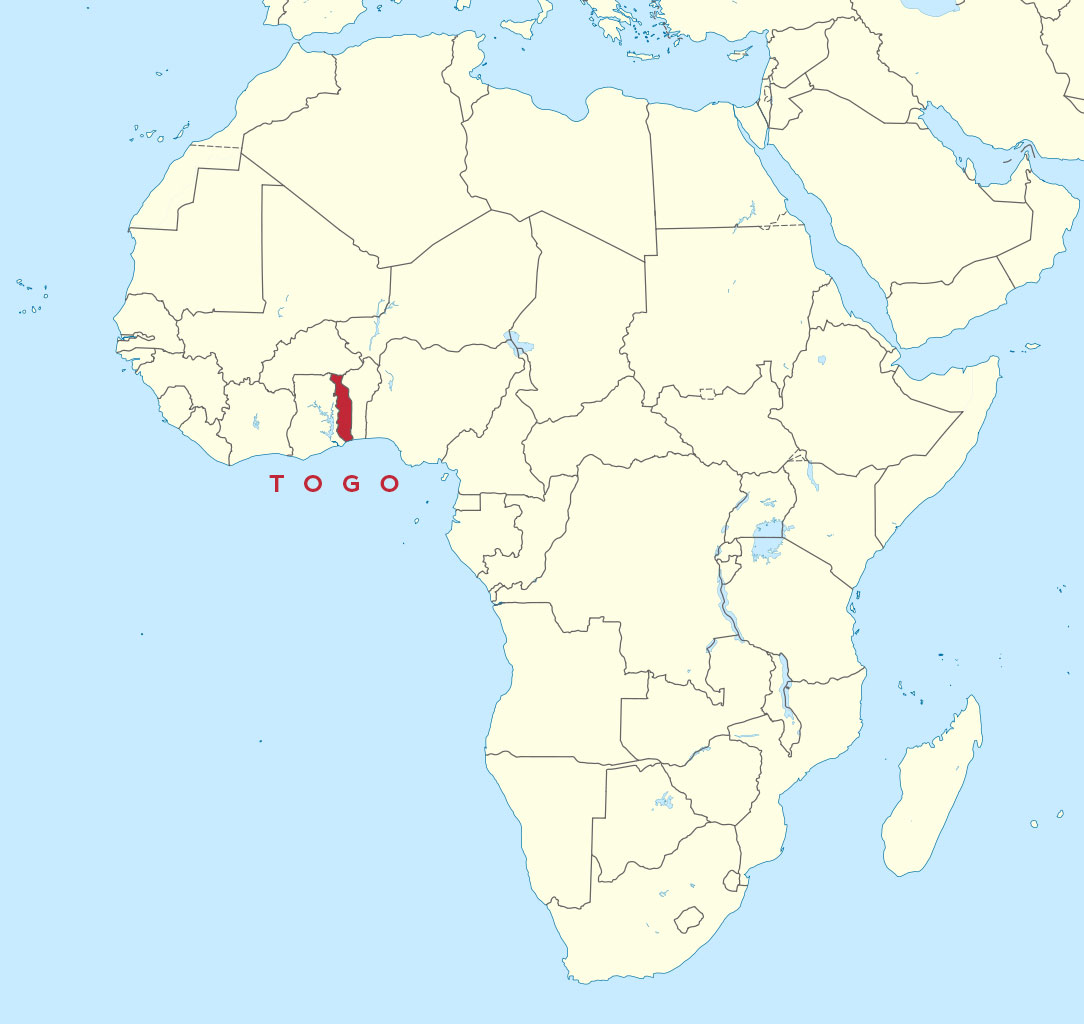 Scales served on the prisoner protection team with CACIT (Collectif des Associations Contre L’Impunité au Togo) in the capital city of Lomé. As a member of the team he kept an eye out for human rights abuses, filmed interviews of victims of torture, put together presentations for seminars, attended conferences on human rights, and represented clients. A Christian organization, every meeting started and ended with the same call and response: “Are you fed?” “We are fed.” “It wasn’t just about nutrition. It meant that we were fed spiritually and emotionally as well.”

Scales lived in an apartment building next to the office with basic furnishings. “I had wi-fi from the office, and a shower, even though it wasn’t hot. I had a living room, bedroom with a mosquito net, a fridge, and a portable gas stove.” Every Tuesday and Thursday, Scales would visit the prison, which often meant a precarious motorcycle ride from his apartment. “People on motorcycles would offer to drive you for a small fee. In some cases the gas tanks would be rusted out, so they would take a 2 liter coke bottle and fill it with gas, stick the gas pump on it, and squeeze it between their thighs to squirt gasoline into the engine while traveling 70mph on a highway.” 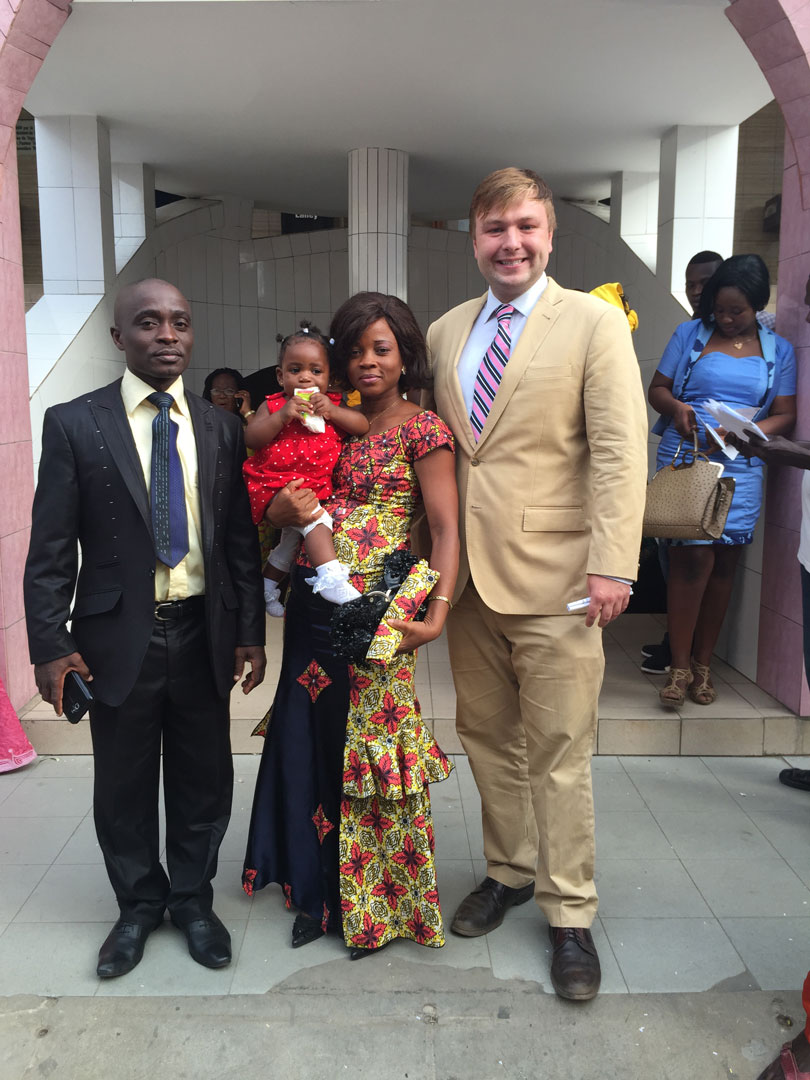 The prison system in Togo is significantly different than the American prison system. “It was amazing to see how relaxed the prison yard is. From 6:30am to 6:30pm, the prisoners spend time in the yard outside. They wear shorts, soccer jerseys, flip-flops and other clothes donated by family and friends. Prisoners prepare and share food brought by visitors because the warden has so little funding to feed his inmates. “People would be out in the middle of the yard with big fires and knives, just chopping stuff up. The mentality of prison is totally different. The laws are so much stricter. If you do something out of line, the guards might shoot you.” There were no fights, a small library, a place to do laundry and a small carpentry bench.

While things are relaxed during the day, prison life gets more difficult at night. The prisons are over capacity by roughly 300%. At night, up to 80 prisoners sleep like sardines in small 625 square foot cement buildings, often on top of each other. “Disease is a big problem. Things like HIV, MRSA, tuberculosis, and bacterial infections are common. Inmates will often pool their money so sick inmates can leave their cell and go to the prison doctor which costs roughly $3. Not out of altruism, but out of self-preservation. Numerous children under the legal age live with their mothers in the women’s quarters. With little supervision or accountability, the prison guards can be brutal and cruel.” 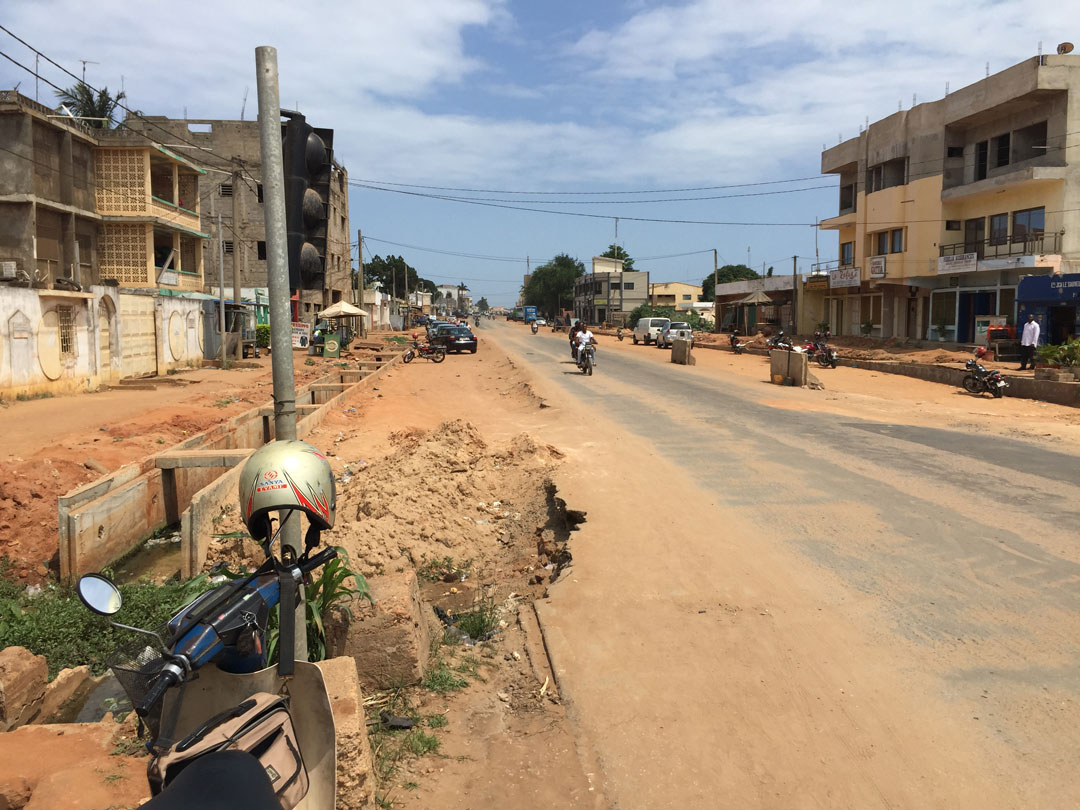 At the prison, Scales would meet with his clients to discuss any potential abuses while doing what he could to expedite the legal process for them. With little infrastructure and little funding, any legal work in Togo is maddeningly difficult. “The legal system in Togo is a Kafkaesque nightmare. The admin building has 2 computers and nothing is digitized. They still use handwritten ledgers which are stacked in unorganized columns all the way to the ceiling. You can spend an entire morning running from office to office, person to person looking for one sheet of paper which may not even exist.”

While nothing about the process was easy or quick, it did have its rewards. “On my last Thursday at the prison, we were walking outside and one of our clients ran into us on her way to the courthouse. She had to fill out some paperwork and she started crying and thanking us because she had been released. Those are the sort of things that make a job like this worth it.”

Scales returned from Togo in August and will be wrapping up his experience in the coming months. With the end of law school on the horizon his next big challenge will be passing the bar. After that, it’s unknown where he’ll end up. Wherever it is, he’ll go with the strong foundation that has been a part of the Scales family for 92 years.