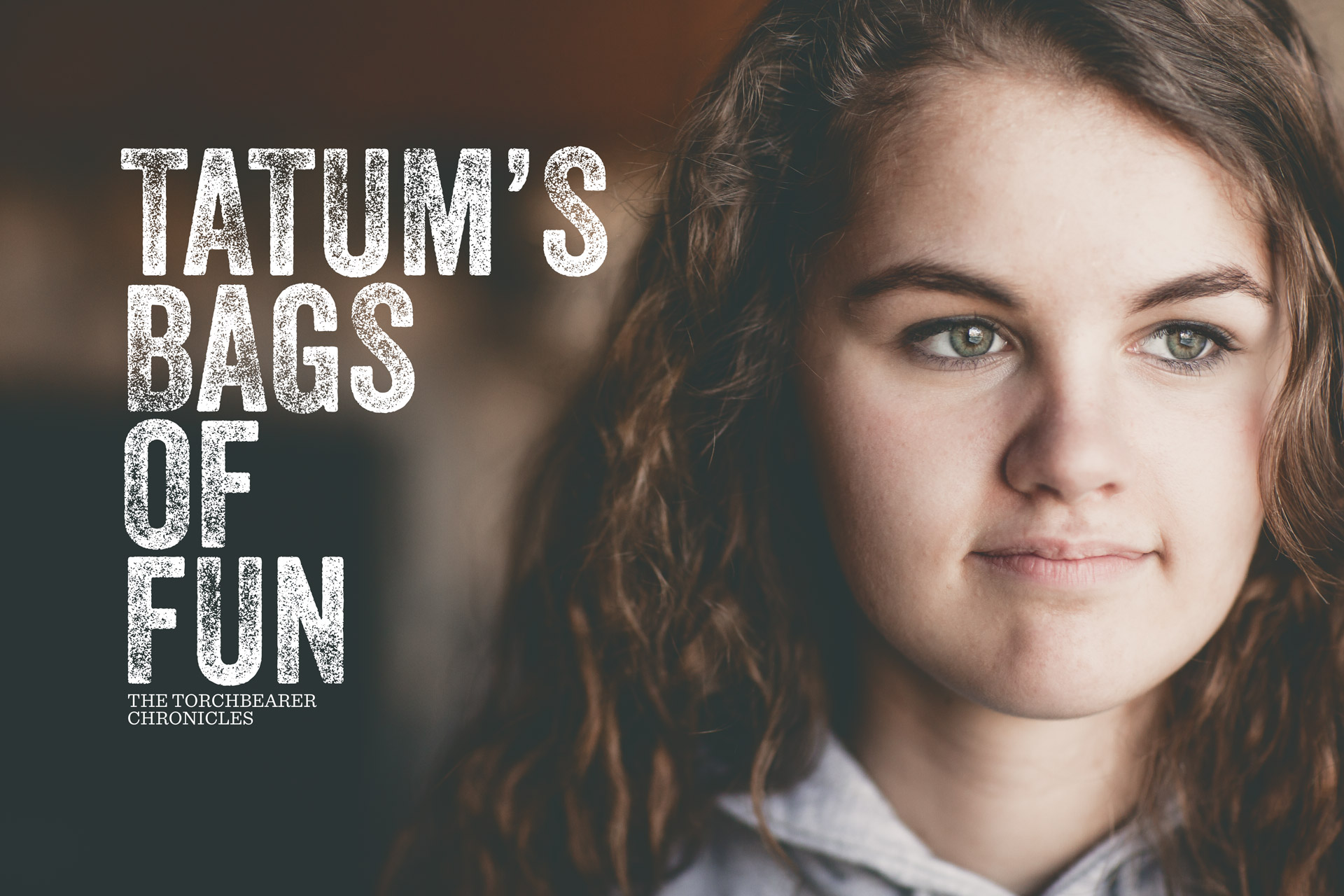 15 year old camper Tatum Parker is the public face of Tatum’s Bags of Fun, an Indiana non-profit that delivers backpacks full of games, toys, and activities to children in the hospital with cancer. After surviving cancer twice, she’s using her experience to give these children something they desperately want and need: the opportunity to be a kid.

If you’re looking for the idyllic white picket American dream, you don’t have to look much further than Tatum Parker’s Indianapolis neighborhood. Boys and girls on bicycles and scooters ride lazily down the street. A gang of kids jumps around on a trampoline in the backyard and another shoots hoops in a nearby driveway. Tatum’s dad plays catch with his two boys in the front yard. The sun bathes the neighborhood in golden light as it descends to the horizon on a perfect 70 degree day.

Inside the house, Tatum’s mother Kendra bustles from backyard to kitchen, preparing dinner for the family and seeing out the remaining children from her in-home day care service. Dozens of family photos line the walls, broken up by uplifting aphorisms espousing the importance of family, faith, and service. It’s comfortable. It’s inviting. This is what home is supposed to feel like. 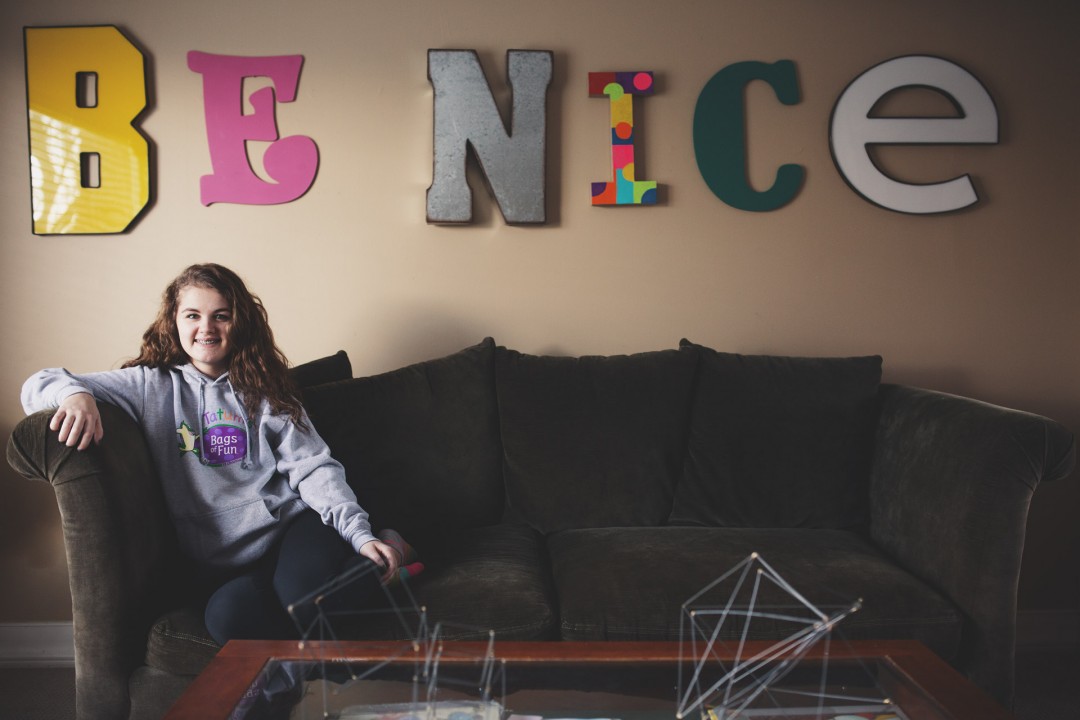 Tatum has just returned from softball. She’s managing this year instead of playing because she just had hip replacement surgery; a byproduct of the extensive treatment she’s received over the years. At only 15 years old she has more experience with hospitals than most of us will have in a lifetime. At six years old she was diagnosed with Ewing’s Sarcoma, a rare type of bone cancer in her femur. At eight years old, it came back in her lungs.

Her brown hair falls in loose curls down her face, framing bright, smiling eyes. For five years she’s been a camper at Camp Tecumseh where she’s learned more about her faith, made new friends, and grown in self-confidence.

Like any high school student she’s busy with homework, sports, clubs, and hanging out with friends. Unlike most high school students, Tatum has a superhero alter ego. For children in the hospital, she’s better than Santa Claus. For parents, she’s a source of support and comfort. For the rest of us, she’s a shining example that kids have the power to make a difference and a reminder that our best bet to make a lasting mark on the world likely comes from our own experiences. As the public face of Tatum’s Bags of Fun, Tatum may not have a secret lair or a superhero costume, but she does have a backpack ; a backpack filled with games, toys, and activities for children in the hospital fighting life-threatening illness. She may not fly, or transform, or scale buildings, but she does have the power to give children something they desperately want and need: the opportunity to be a kid again. 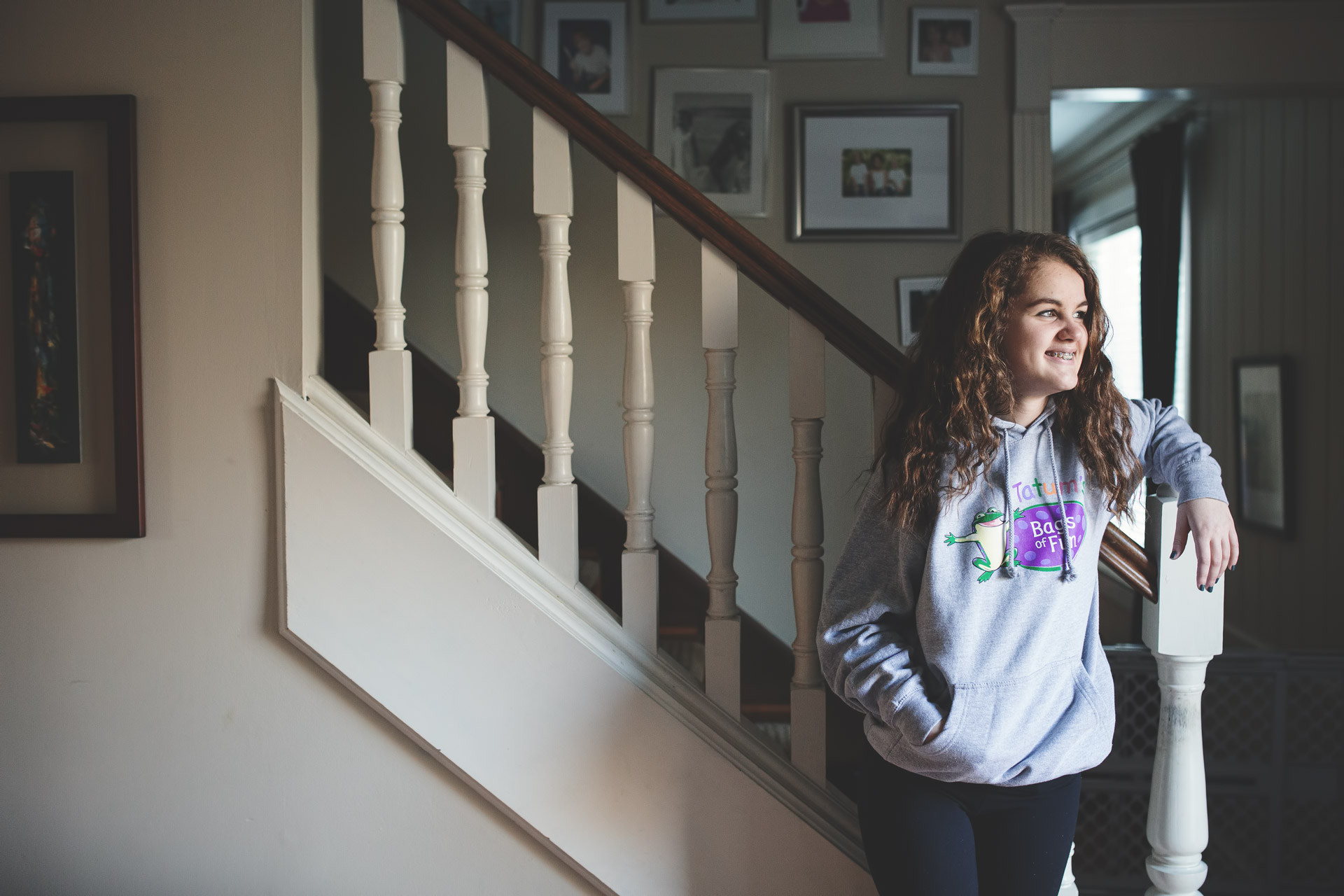 Weeks before her sixth birthday, Tatum awoke screaming in pain. Her parents drove her to St. Vincent where the doctors took scans of her leg and returned with bad news. It was Ewing’s Sarcoma, a rare form of bone cancer that largely affects children and adolescents. “I was in a hospital room watching TV when the doctors came in,” Tatum says. “My parents started crying while I was laughing at Full House. After my doctors and nurses explaining everything I was most upset about not being able to go outside and run around in the neighborhood.”

Because Tatum’s cancer was in her leg, she couldn’t walk. In addition, her chemotherapy zapped her energy. She had two options for chemo. She could spend one night in the hospital but get violently ill after the treatment, or she could spend four nights in the hospital, but not get sick afterwards. “I liked the 4 night option the best because the chemo didn’t make me feel different. The nurses were great and so nice. It felt like home because I was there so much.”

She only attended one day of kindergarten before her diagnosis. Luckily for Tatum, a family friend volunteered to tutor Tatum through her kindergarten year. 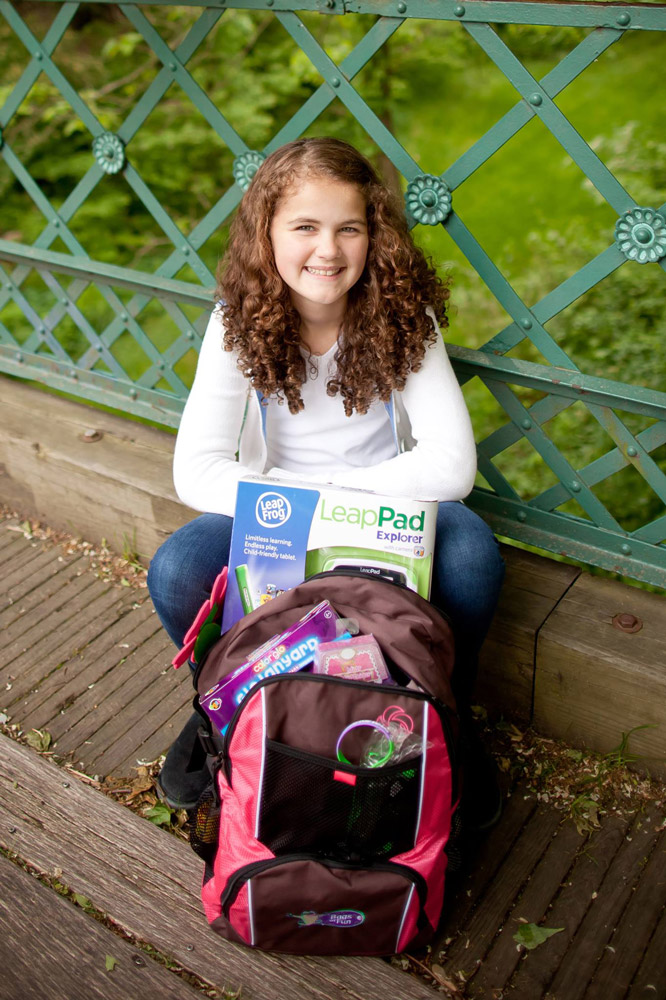 A month after Tatum’s diagnosis, the Parker family welcomed their newest addition, a newborn baby boy named Truitt. “My mom was taking care of a newborn and a cancer patient. She took a nap next to me everyday. We were so lucky that my mom’s parents lived a few miles down the road. They did so much. They really helped raise my brothers.”

In 2007, Tatum entered remission. Her hair started growing back and she started first grade. However, her doctors had warned her that this kind of cancer has a tendency to come back. In November of 2008, it did. This time, they found the cancer in Tatum’s lungs. Luckily for Tatum, they found it early.

Treatment was easier this time around. Partly because she knew what to expect, and partly because the treatment options were easier. In addition, because the cancer was in her lungs and not her leg, she could walk. “This time, it wasn’t stopping me from doing things.”

Tatum was in outpatient care. “I’d go to the doctor from 9am until 3 or 4pm. I’d go for a week, then have a week off. The doctor mixed the two forms of chemotherapy together so it didn’t take as long, and I didn’t get sick.” Although she wasn’t spending as much time in the hospital, she was spending a lot of time in the car. While she received regular chemotherapy, for six months Tatum and her mom would drive from northern Indianapolis to Bloomington every day to receive Proton Beam Therapy.

Another full year passed before she entered remission again in October of 2009. Tatum had now missed almost two full years of school, but thanks to her tutor, she was able to start 3rd grade . 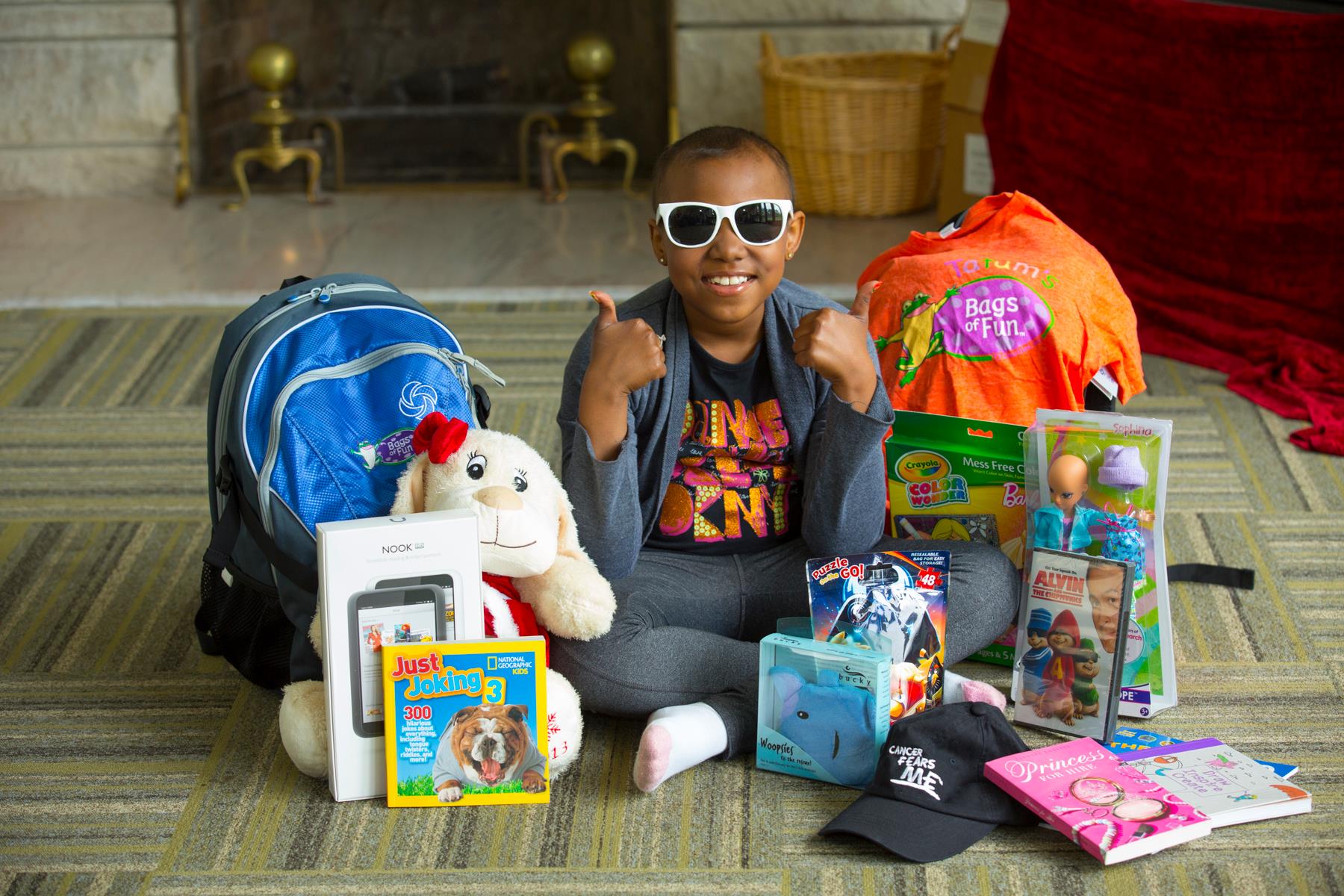 Boredom isn’t a word often used to describe cancer unless, of course, you’re familiar with the treatment. In between the milestone moments — diagnosis, decisions, checkups, relapse, remission, follow up — are hours and hours of  time in a hospital bed. “Treatment is very boring and very long. Certain kids with Leukemia can’t leave the hospital for 6 months. The TV gets pretty boring when it’s all you have,” says Tatum.

Tatum’s Bags of Fun fills the void by providing children fighting cancer with games, toys, and activities that they can play with during their hospital stay. “Just because kids have cancer doesn’t mean they don’t want to do normal things.” While organizations dedicated to medical research receive the majority of fundraising dollars and press attention, Tatum’s Bags of Fun offers something tangible, immediate, and desperately needed for children in the hospital dreaming of a normal childhood.

The idea for Tatum’s Bags of Fun started after Tatum received her own Bag of Fun from the Gabby Krause Foundation during her first fight against cancer. Based out of Colorado and named after a six-year-old girl who died of brain cancer, the Gabby Krause Foundation delivers bags of fun to children with life threatening diseases and conditions around the United States. “I used the stuff in my backpack every day and started noticing that kids didn’t have what I had. I was in a room next to an eight-year-old boy . His parents weren’t there, his siblings weren’t there. He didn’t have anybody. His parents had to work and watch his siblings and they lived far away so they couldn’t drive to the hospital very often. I started lending him the stuff I had in my bag. I continually saw kids who were in the same situation. No parents. No siblings. Nothing to do. They just have this TV.  Just bored out of their mind.”

In 2007, after finishing treatment the first time, Tatum and her family started Tatum’s Bags of Fun in Indiana. Inside each bag is $350 worth of movies, books, dolls, crafts, stuffed animals, toys, and an electronic. The youngest kids get Leapsters. The oldest kids get Kindle Fires. 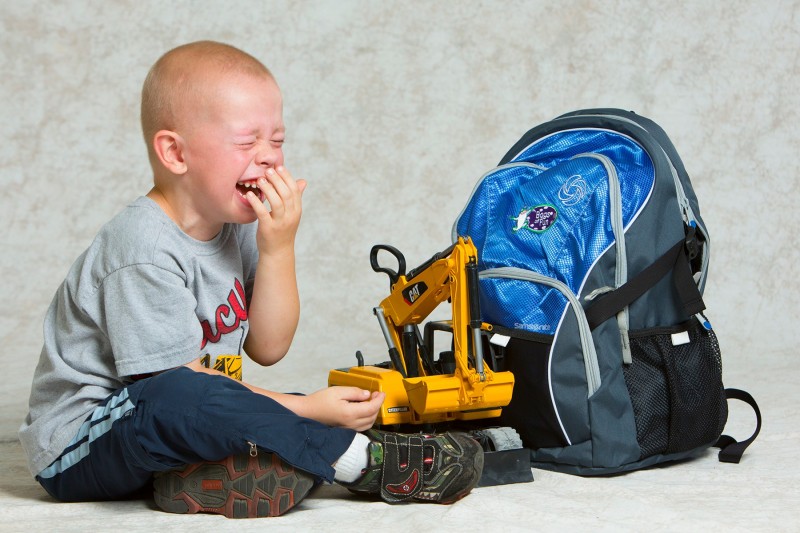 The nurses at each hospital  text Tatum’s mom the age and gender of the children in the hospital’s care. “Every kid that gets diagnosed with cancer in Indiana has to be filtered through one of those hospitals. Riley sees 15-30 kids a month. Peyton Manning and Riley North see 4 to 5 a month. We deliver a lot of bags right before school starts because that’s when kids get their checkups.” 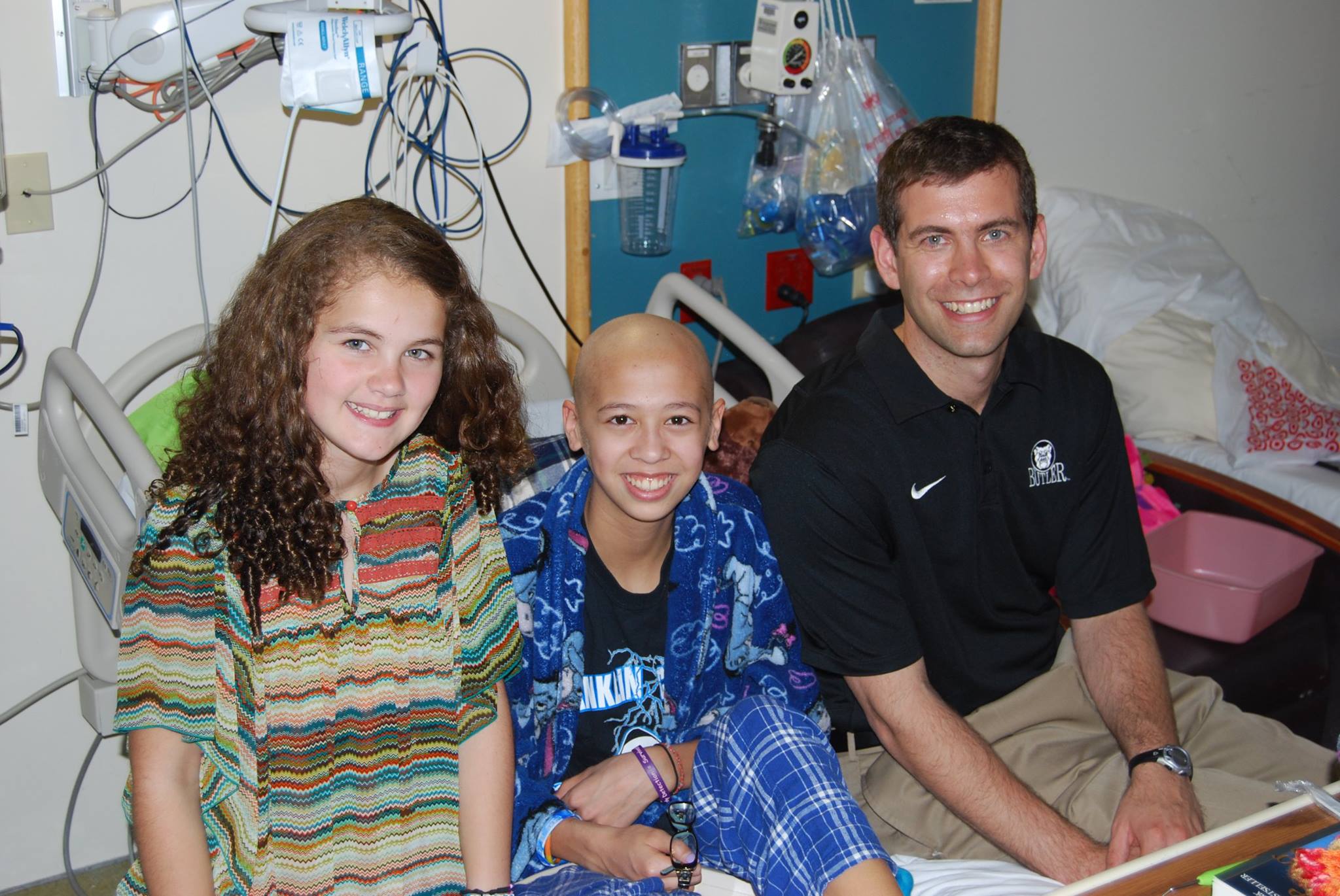 Tatum’s Bags of Fun isn’t just a comfort to children. Tatum is often a comfort to terrified parents. “After we deliver a bag, the parents usually want to talk to us and ask questions about my story and treatments. They want to know what it’s going to be like.”

Unlike many organizations, Tatum’s Bags of Fun employs a kid’s board which is responsible for fundraising and marketing. Meeting every two months, the board is composed of Tatum and her brothers, as well as a group of neighbors and friends. While a traditional board of directors composed of adults handles the legal and financial decisions and plans the organization’s largest fundraiser, the White Party, the kids have organized numerous events to raise funds. “The past few years, we’ve done shave-a-thons. Boys raise $350 and then shave their head. We bring in food trucks and a band. It’s a lot of fun.” The kid’s board is currently working on putting on a festival consisting of bands, food trucks, and plenty of games. The kids handle everything, from attracting sponsors, to recruiting local vendors, to getting the word out. 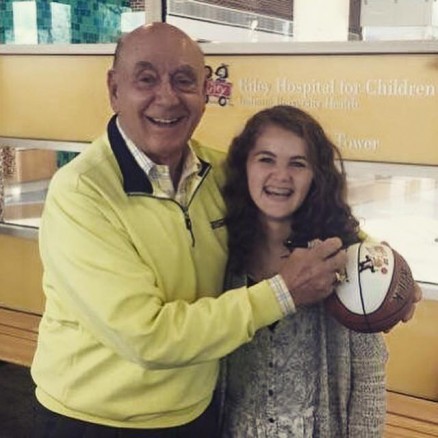 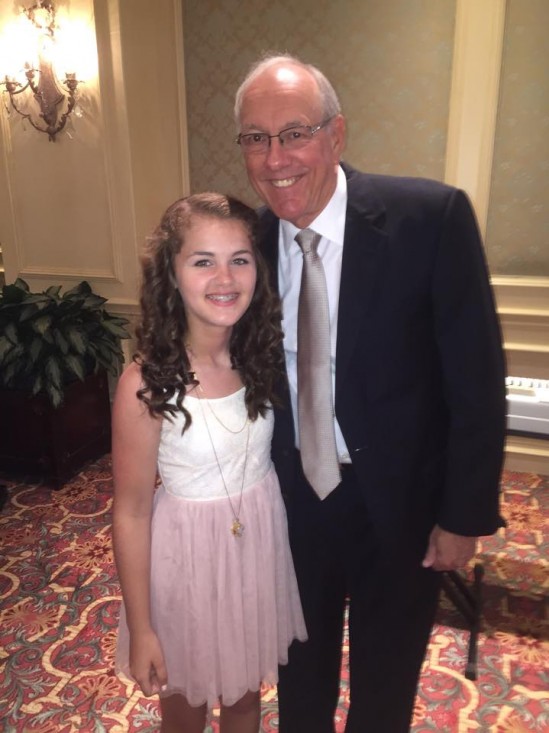 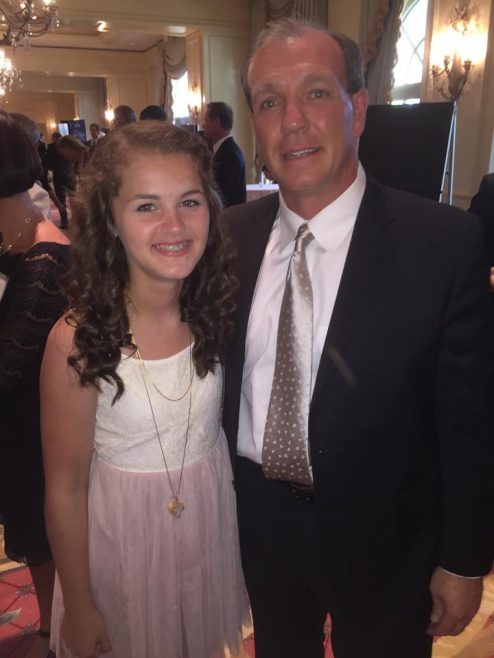 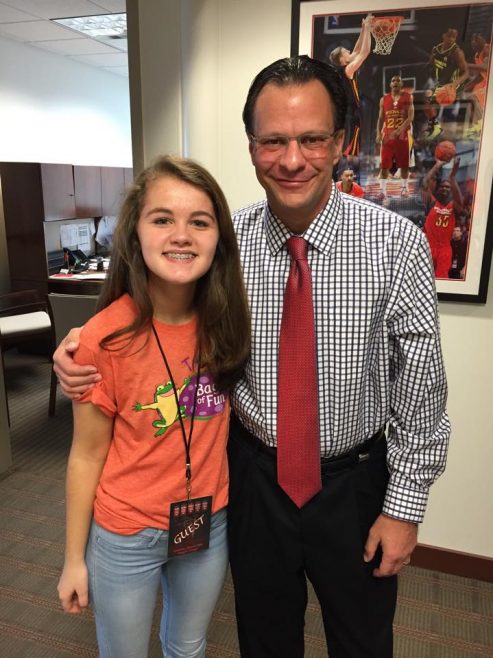 Today, Tatum’s Bags of Fun has delivered over 2,500 bags to children in hospitals, won celebrity endorsements from Tom Crean, Brad Stevens, Dick Vitale, Jeff Gordon, John Greene, and others, and landed Tatum the 2014 Power of Children award given annually by the Indianapolis Children’s Museum.

For Tatum, the joy comes from helping kids. “I love seeing the impact that it makes. It’s one thing when people say, “I’m going to donate money to this organization.” It’s another thing to see it and experience it and to understand what these kids are going through. I’ve been there. I know exactly what’s going on. If you have something you’re passionate about, you can do it. For me, having experienced cancer, I saw a problem. When kids have an experience in their life, and they see something they can fix, they want to fix it. You don’t have to be an adult to come up with an idea and pursue it. If you feel like you can help, that’s something you can do, no matter your age.”