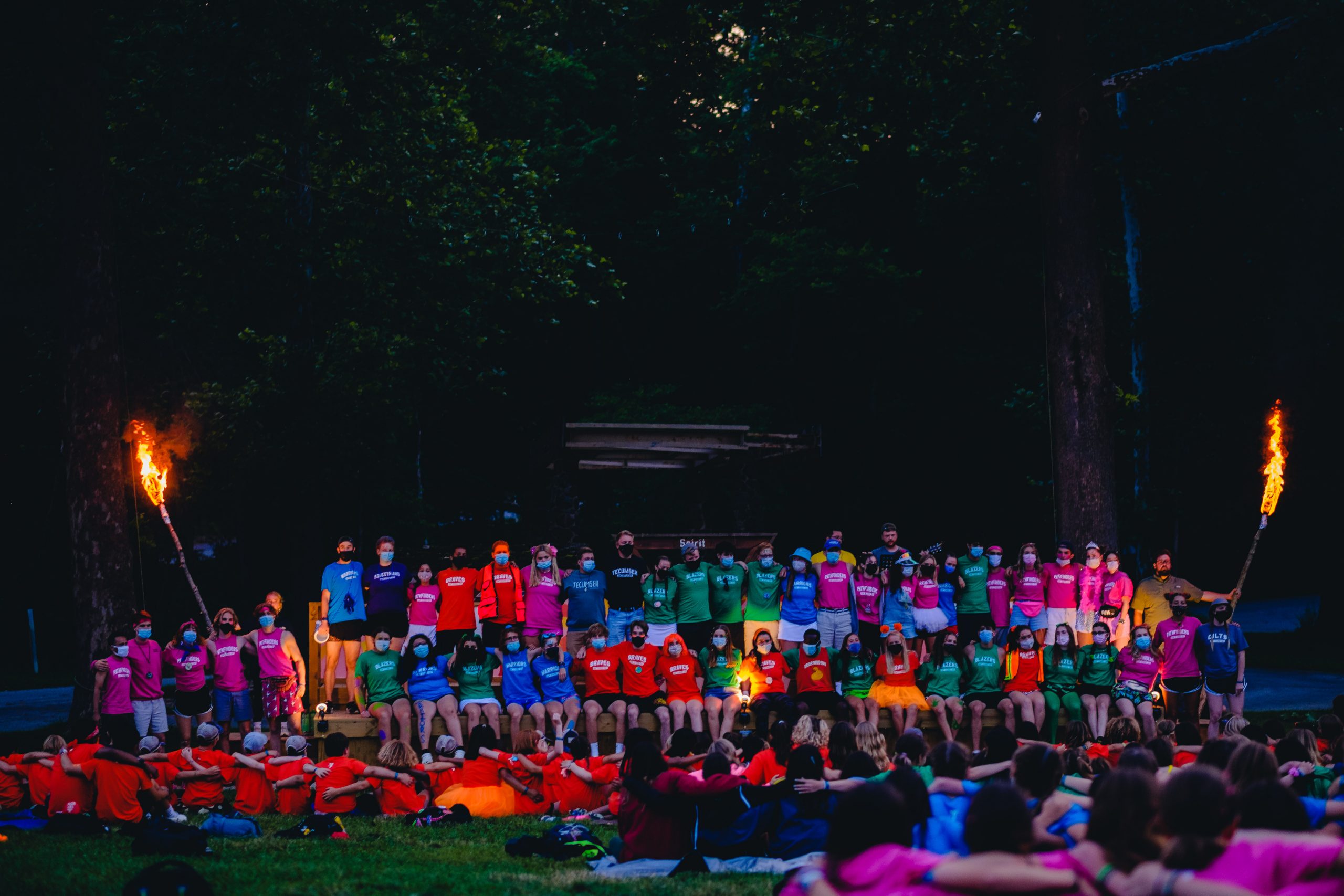 This is Why We Work at Camp – Thoughts from Summer Staff

It is increasingly difficult to hire staff. This has been true for years, but compounded by a pandemic that, among other things, broke up some of the continuity of returning staff that drives our hiring season each year. The staff we would have expected to return in 2020 have now found full time employment or have moved farther away from Camp.

The good news: we have staff. Many camps across the country are operating at a much lower capacity because they can’t find the necessary staff to operate their programs. We are fortunate to have hired the staff we need, and not just any staff, but good candidates that can carry on the important staff culture we’ve cultivated over many years.

I have been asking staff why they work at camp. When faced with a myriad of opportunities – internships, summer school, other employment – why are our summer staff choosing to work here?

Future teachers, mechanical engineers, choir directors, speech pathologists, and more have all decided to spend their summer at Tecumseh. Here’s why. 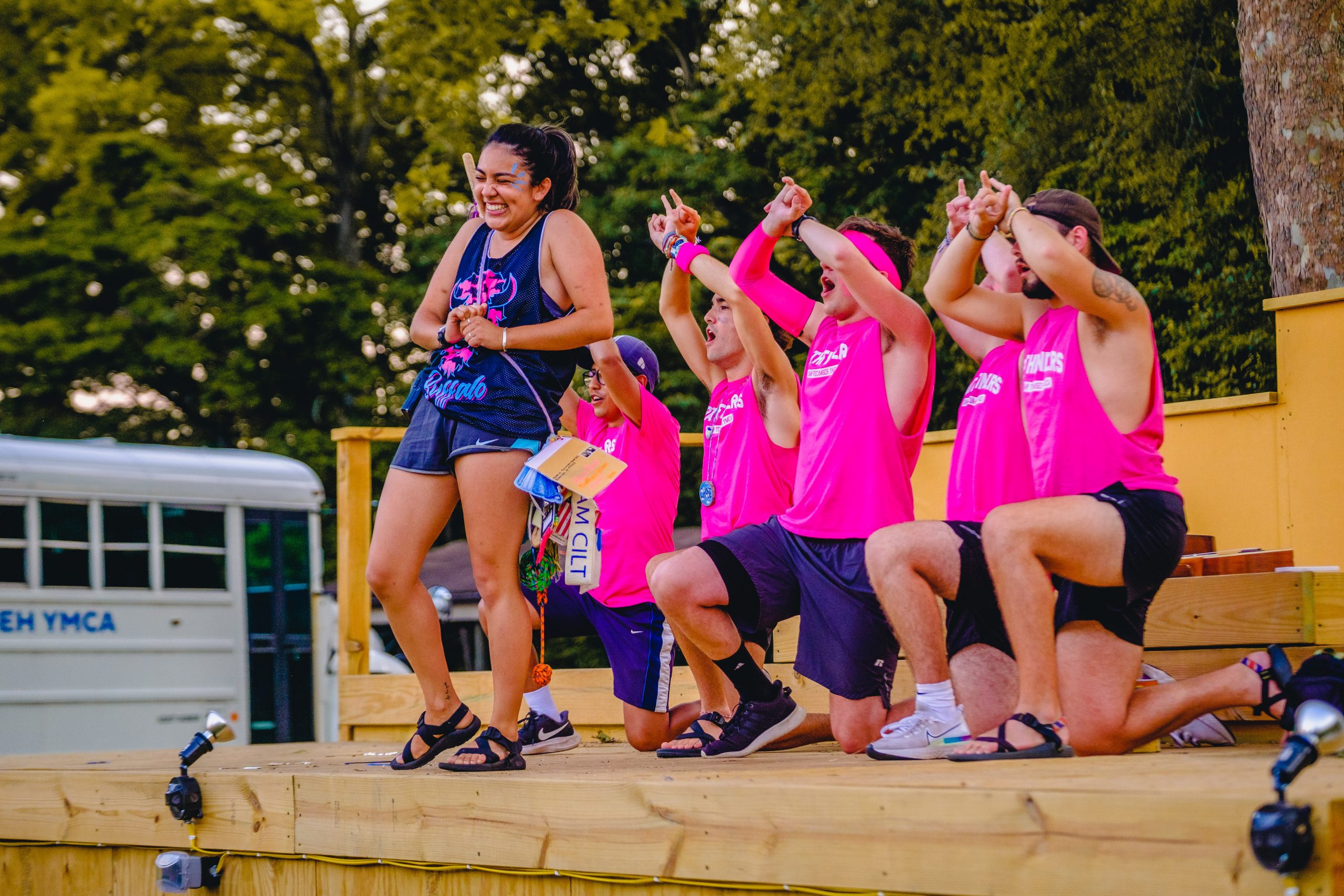 Andrea Garcia chose to work at Camp for a second summer and sees a way to develop the kinds of skills she needs for a career as a choir director.

“I think initiative is one of the biggest things I’ve learned here at camp.” Andrea worked in the cabins as a counselor in 2019, and is now in a summer leadership role as assistant Lake Village director.

“Camp is so fast-paced, as I feel like a lot of jobs are, and camp has taught me to trust myself a lot more than I think I used to, and to make good, responsible decisions on the fly.”

Andrea wants peers to know that camp is as valuable of a job opportunity as internships and maybe reaches a level of skill development that goes beyond an average career-readiness tract.

“(Camp) teaches campers and counselors alike, not just how to coexist, but how to have empathy and to really love and respect people who are different from you.”

Andrea wears a lot of hats at camp with her current position.

“I’ve had to use so many different skills that I never imagined using while working at camp. You’re just expected to be so many different things. You do customer service. You do problem management. You are an emotional support figure for people. I think there are a lot of different niche skills that you can hone while at camp that I’m certain will serve people where they go.” 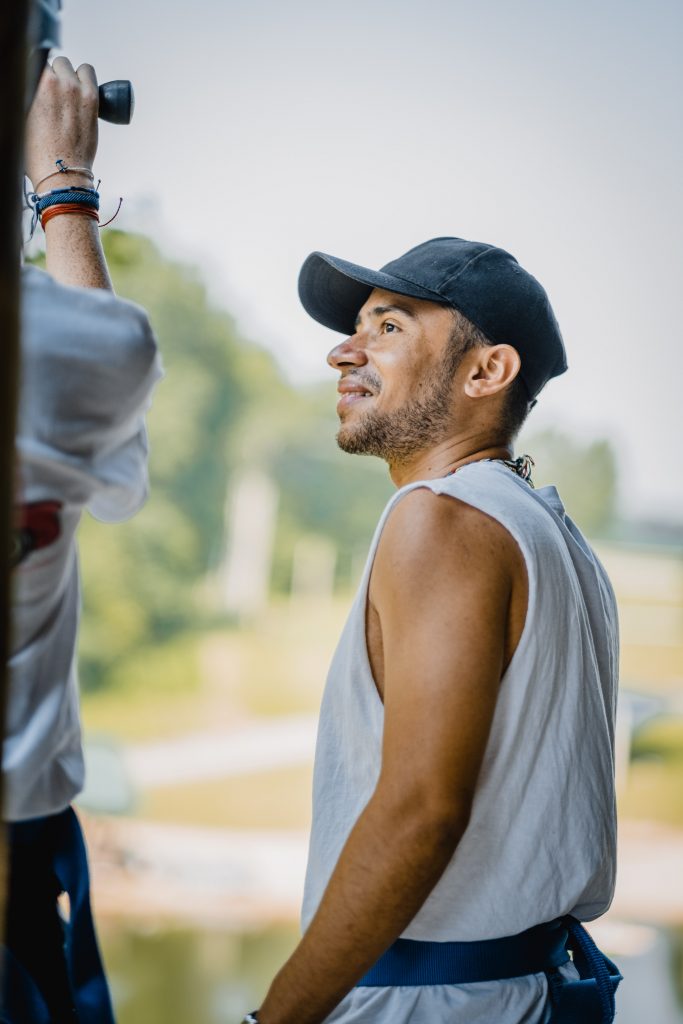 Oscar Garzon, a first year counselor from Colombia, wanted to experience something that is uniquely American. So he applied to be part of a camp exchange program in Colombia where American camps can find international staff.

“I will say that, most of the time, engineers will have to have management skills. So, here, working with a group of people – in this case, kids – makes you step up and strengthen your leadership skills.”

When Oscar returns to Colombia after the summer, his diploma in mechanical engineering will be waiting there for him, and he knows that the leadership and management skills he’s developing at Tecumseh will serve him well in his career. 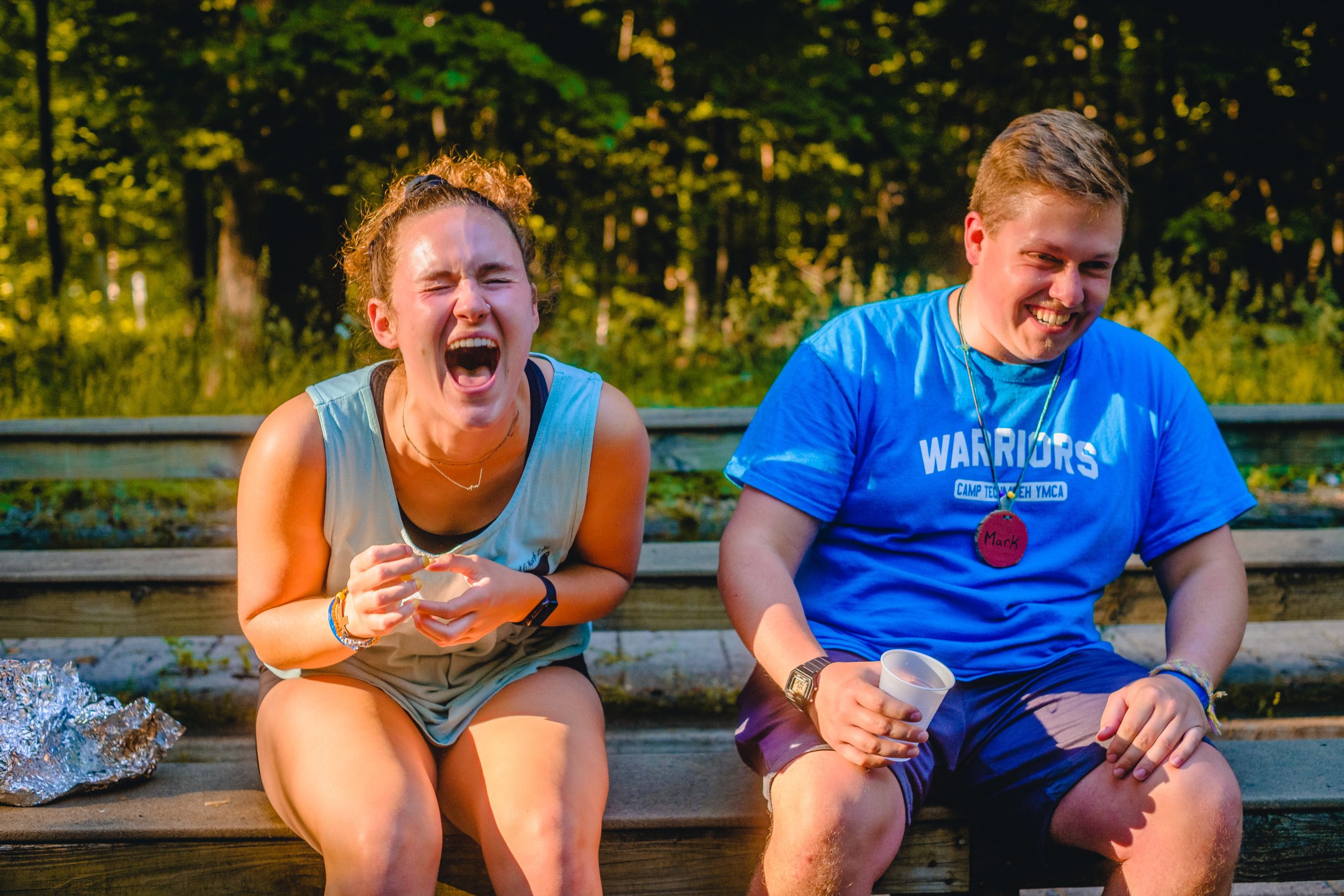 Emily Polonus, a second year counselor who is working with our Campers in Leadership Training (CILT) program, felt like she checked off all the boxes for her future career before working at camp. She was in a sorority; she was active in various campus clubs at Marquette; she got into a good grad school for speech pathology. But in 2019, she wanted another experience that went further than checking off boxes for her next step.

“I have told my friends that I don’t think I could have moved to Boston for grad school without first working at camp. I just came out of it with so much more confidence and an ability to interact with people and make important connections.”

Camp helped Emily look at the bigger picture. Before, when working with a student and their speech needs, the focus was more on fixing a specific speech issue. But, camp helped her see the importance of fixing that specific issue because it will improve the overall quality of life of the person.

She’s now finished with her masters and I wondered why she decided to come back for another summer.

“I think I’m the best version of myself here. I like who I become when I work here.”

She sees the bigger picture when she’s working at camp. It becomes less about what her next step in life is, but more about how she can be part of a team and help her campers accomplish something during their time at Tecumseh. 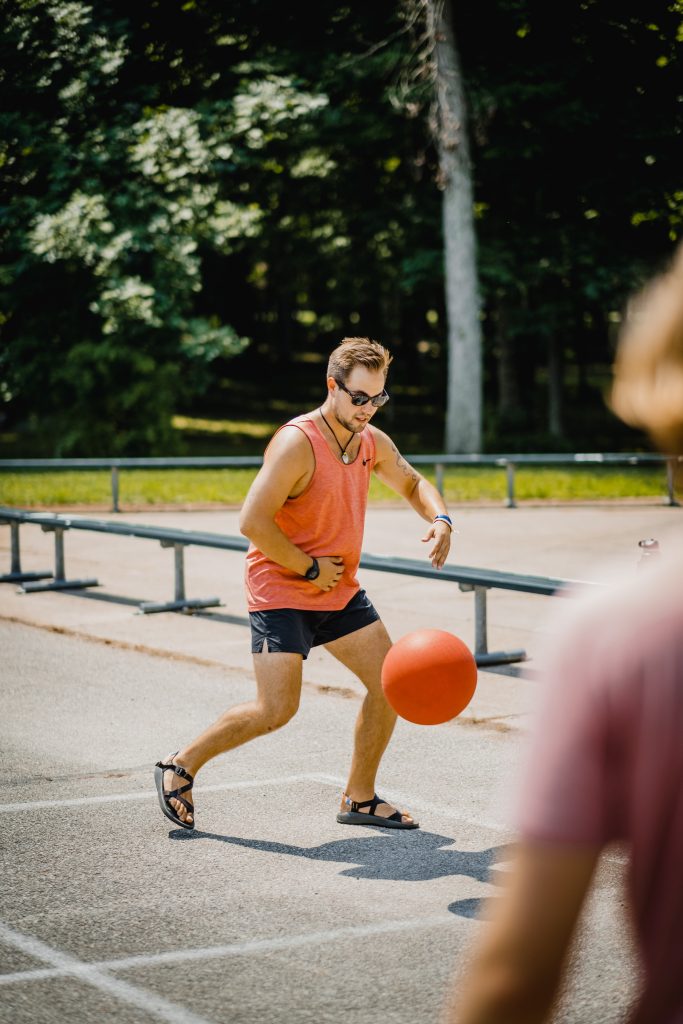 Aaron Ludwig, a seasoned counselor who spent a few summers away, is back in a cabin for a summer in between school years. Aaron teaches sixth and seventh graders in northwestern Indiana, but he didn’t always know that’s what he wanted to do.

“I didn’t know how much I would enjoy working with kids, but I knew how passionate I was about Camp and how badly I wanted to be here.”

He worked on staff for day camp, and then a few summers with overnight camp, and realized he enjoyed working with kids so much that he switched majors at Purdue from engineering to education. And then there was all this built-in preparation for his future career as a teacher while he was working with kids at Tecumseh.

“Spending so much time getting comfortable with kids, and learning how to interact with them on a level that actually teaches them something instead of just helping them have fun all week long, is something I really learned at Camp.”

Camp has helped him go deeper and take teaching to a new level.

“We talk so much about level 1 and level 2 skills and looking deeper. It’s made teaching a lot easier. It makes communicating with kids in the classroom much easier. When you can get a kid who is apathetic to get excited about something weird, it’s awesome.”

Aaron stressed to me that something that is so beneficial about working at camp, and not just for future teachers, but for anyone, is determination.

“Finding the determination and the grit to keep going – because nine weeks is a long time. I’m exhausted and it’s week five. But I know that I have to give 100% for the rest of the summer, no matter what, because that’s what the kids deserve.”

After talking with these four, I found it incredible that they all spoke so well about why they work at Camp. I expected to maybe coax them into talking highly of this job, and its importance, but they already got it. No need for a nudge from me.

There’s something transformative that happens when you work here. These four know that. And now Camp Tecumseh will continue to work hard to find future staff who will have similar experiences in the coming summers.