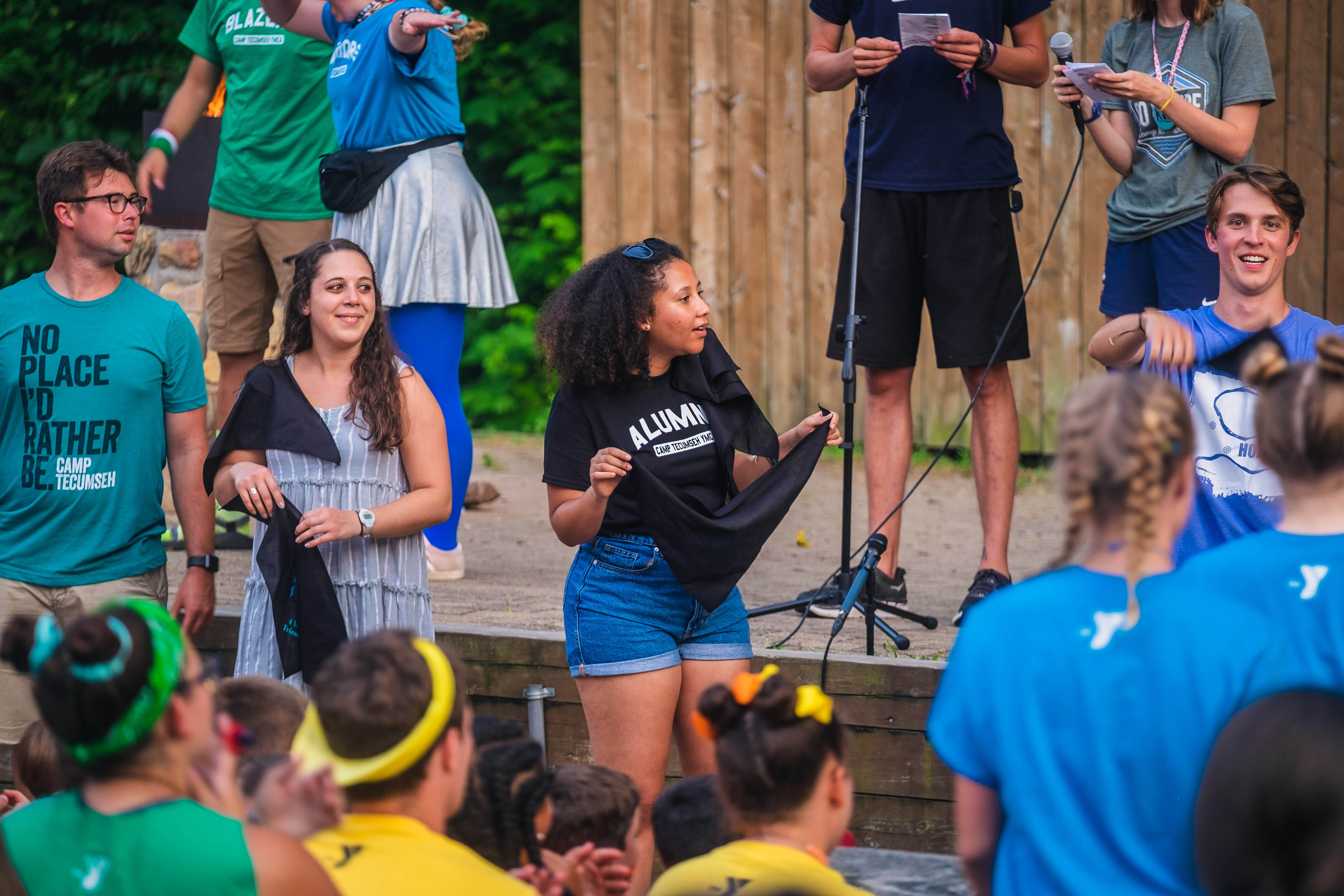 Carrying the torch and lighting the way

Camp Tecumseh Alumni play a powerful role in our mission. Tecumseh counts on alumni to carry what they learned at camp into the world. We like to know what our alumni are up to. Check out the notes by decade below.

Laura Hastings (1978) lives in Urbana, Illinois. She has two daughters who both went to Camp Tecumseh and are graduates for DePauw University. Laura teaches elementary special education, and in her spare time, she teaches swim lessons to people of all ages, abilities, and disabilities.

Chad Coleman (1987-1989) lives in Naperville, Illinois. He spent 20 years as a landscape architect, but now teaches high school chemistry as part of the special education program in West Chicago, Illinois. He has a 12-year-old daughter. He says he carries Tecumseh with him always, and was inspired by Scott Brosman to become a counselor. 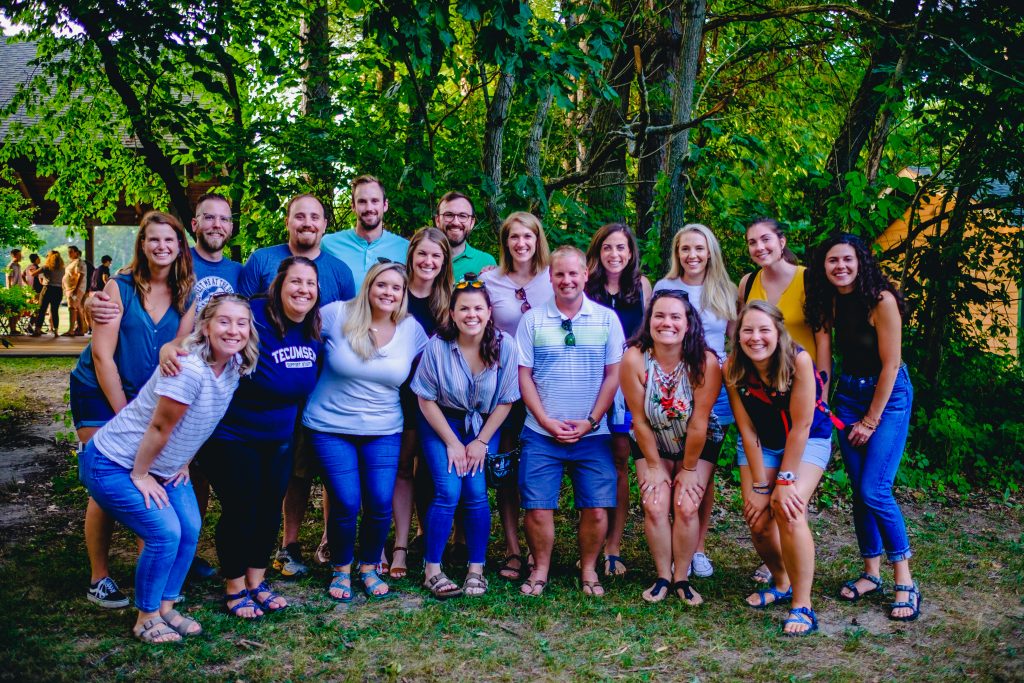 Heather Armstrong (1994-2000) lives in Brownsburg, Indiana. She has been married for 15 years. Their son, Levi, is nine years old and will be attending Camp Tecumseh for his third summer in 2020. Heather has been teaching for 20 years and has loved it.

Kelly Mahn (1996-1999) lives in Germantown, Maryland and celebrated her 11th wedding anniversary last November. She has twin boys almost a year-and-a-half in age. Kelly has worked as a middle school counselor for 12 years.

Adrienne “EE” Myer Bohannon (1997-1999) lives in Seattle, Washington with husband, Patrick Bohannon, and their two kids. Their daugther, Lucy, will be coming to Tecumseh for her second summer in 2020. Adrienne is a pediatric speech-language pathologist, and her family is involved in their community and with their church.

Sara Cornett (2000-2003) lives in Valparaiso, Indiana and is married to Brandon Cornett. She is a part-time teacher at St. Patrick’s School in Chesterton and part-time stay-at-home mom to full-time daughter, Kathryn Elizabeth.

Ashley Pullins (2002) lives in Delphi, Indiana and is a stay-at-home mom and student.

Michael Malooley (2004) lives in Elkhart, Indiana and is happily married to Vicky. They have a four-year-old daughter, Analise. Michael is a Programs and Services Officer for the Elkhart County Sheriff’s Office where he facilitates educational and therepeutic programming for jail inmates. He also volunteers with his church’s family camp, and is interested in connecting with current Tecumseh summer staff who have an interest in law enforcement.

Kylie Fraser (2006) lives in Monticello, Indiana. She worked at a YMCA in East Tennessee during college. She graduated from University of Tennessee in 2011 and went to work for a non profit in mental health for kids. She now works with kids in the foster care system. She has a son who will be attending Tecumseh in a few years.

Alex Miller (2008) lives in Olivette, Missouri and works for Nestle as an engineer for a cat and dog food supply chain. Alex volunteers with the United Church of Christ youth group, Hoosier Burn Camp at Camp Tecumseh, and the United Way.

Arielle Hirt (2006-2012, 2014) lives in Indianapolis with her husband. She is the volunteer coordinator at School on Wheels, a non profit that provides supplemental education for kids experiencing homelessness.

Sara McSoley Spears (2006-2009, 2011) lives in Indianapolis, Indiana with her husband and baby. She is a pediatric occupational therapist.

Paula Hamilton (2007-2009) lives in Attica, Indiana. She was married in 2011 and has four kids. Her and her husband also becamse foster parents this past summer to two more kids, making it a house with six kids under the age of seven.

Carolyn Ostafinski (2007-2012) lives in Valparaiso, Indiana and is married to fellow Tecumseh alumni, Sam Ostafinski (2011-2012). They both work in the Valparaiso school system and are expecting their first child in February.

Zoe Smith (2009-2011) lives in Chicago, Illinois. She married Logan Konkol in June of last year and is completing a PhD in clinical psychology.

Michelle Lippoli (2009-2011) lives in Chicago, Illinois and is the event manager for the Computer Science Teachers Association. She also got engaged in November.

Kara Nielsen (2009-2013) lives in Glen Ellyn, Illinois. After working as an educator at the Lincoln Marsh, she now stays home with her two girls – a two-year-old and a newborn. She fosters cats and kittens through ARF Illinois.

Tim Pagano (2011-2012) lives in Omaha, Nebraska. After a degree from IU, Tim earned his doctorate in psychology and he joined the Air Force. He is now a Captain and practicing clincial psychology at Offutt Air Force Base in Nebraska.

Zachary Huffman (2011-2014) lives in Atlanta, Georgia and is the president and CEO of a drone integration company that works with pilots and coporations to gather aerial data and storytelling perspectives. He earned his B.A. from Ball State and M.A. from Central Michigan.

Emily Harlow (2011-2015) lives in Noblesville, Indiana and works full time for YoungLife. Specifically she works with middle schoolers and other volunteers through WyldLife. She also sits on the board of Serve Noblesville to better her community.

Liz DeMoss (2011-2018) lives in Carolina Beach, North Carolina. She got married in November to her husband, Andrew, who she met at a camp in North Carolina.

Mary Delach (2012) lives in Brookston, Indiana. She is a 6th grade teacher at Frankfort Middle School.

Jack McGee (2012-2017) lives in Evanston, Illinois. He is pursuing a PhD in chemical and biological engineering at Northwestern University.

Maddy Wilson (2013-2016) is from Fishers, Indiana, but is currently in Sri Lanka. After graduating with a teaching degree in 2018, she traveled all over the world including Spain, France, Ireland, Morocco, Portugal, and now Sri Lanka.

Lauren Baney (2013-2017) lives in Bloomington, Indiana with a goldendoodle named Louie. She works at a runaway and homeless youth shelter as a critical case manager.

Emily Dignan (2013-2018) lives in Prague. She received her english teaching certificate and teaches special education and english at an international school.

Patrick Power (2015) lives in Chicago, Illinois. He recently graduated with a master’s degree in digital marketing strategies from Trinity College in Dublin, Ireland, and now works in Chicago.

Nicole Burjek (2015-2017) is from Oak Brook, Illinois and is finishing her degree in public relations at Indiana University. She recently accepted a job with Frito Lay in Chicago.

Will Ziegert (2015-2018) is from Indianapolis, Indiana and is finishing his degree at Miami of Ohio. He will be moving back to Indianapolis to work with KSM Consulting and taking part in the Orr Fellowship.

Ben Gaffigan (2016-2018) is from Woodsboro, Maryland and is currently in the Peace Corps in Indonesia.

Taylor Hoftiezer (2016-2018) is from Zionsville, Indiana. She graduated from Purdue last August and is currently working in applied behavior analysis for kids with autism.

Molly Bulger (2017-2019) lives in Indianapolis, Indiana and is a career coach for high schoolers with disabilities through Easter Seals.

Patrick Cavanaugh (2018) is from Lafayette, Indiana. He joined the Air Force in October and is currently training at Hurlburt Air Force Base in Florida.

Have an update you want shared? Send us your recent updates (within the last year) and we’ll post them in upcoming editions of the Tecumseh Tales.

To submit your info, go to www.camptecumseh.org/connect and click on Alumni.